Commentary: Becoming a bike advocate and how Streetsblog Denver helped me find community

This guest commentary is by Loren Hansen, a bicycle and public transit advocate with groups from Denver Bicycle Lobby to RTD Memes for Front Range Teens. You can read his blog Life on Denver Transit and follow him on Twitter at @LorenMHansen.

My relationship with bicycles began in 2017. After looking on Google Maps, I saw that the fastest way I could reach my destination was by bike. At that point, I considered myself simply a bicycle commuter, not someone thinking about improving anything beyond my own commute. Vehicle traffic and challenges while riding seemed to me like individualized inconveniences rather than systemic issues.

The next year began my transformation. I began to write about the High Line Canal, which was catty-corner to my apartment. I was concerned about the amount of trash build up. Still, in this phase of my experience with urbanism, I was unable to see the connection a clean and completed canal had to improving biking and walking in the region. Then, I got involved with Streetsblog Denver.

My first encounter with Streetsblog Denver was at a “meet the executive director” event with Andy Bosselman. I met Andy and advocates from all walks of life. From a person who uses a wheelchair and an advocate who later became an elected councilmember, to people who rode for fun and urban planners that wanted systemic change, my connections helped me see systemic issues. I began reviewing bike lanes around this time, learning through people who knew significantly more than I did.

I parlayed writing for Streetsblog Denver into joining the Denver Bicycle Lobby and the Mayor’s Bicycle Advisory Committee, building a community I’d never had before. Becoming the biking advocate I am now began with Streetsblog Denver. I hope that, in its absence, the advocacy and writing community it built can continue to flourish and grow. 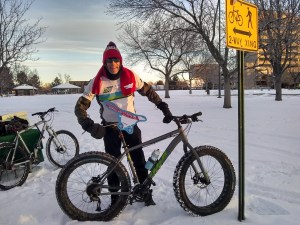 Bewhiskered bicyclists arrived with frost on their beards as they rolled up to Winter Bike to Work Day stations this morning. They were among the devout who showed up three days after a storm piled 5.5 inches of snow on the ground and single-digit temperatures left icy conditions on the city’s streets, trails and bike lanes.