Bicyclist Death Brings Denver Traffic Fatalities to 62, Same Number Reached in All of 2018

Streetsblog would like to thank The O’Sullivan Personal Injury Law Firm for supporting this series. Financial contributions do not influence our content. See our editorial policy.

Updated Oct. 9 12:50 p.m.: This story now reflects that Cameron Holub was the cyclist who died Monday. 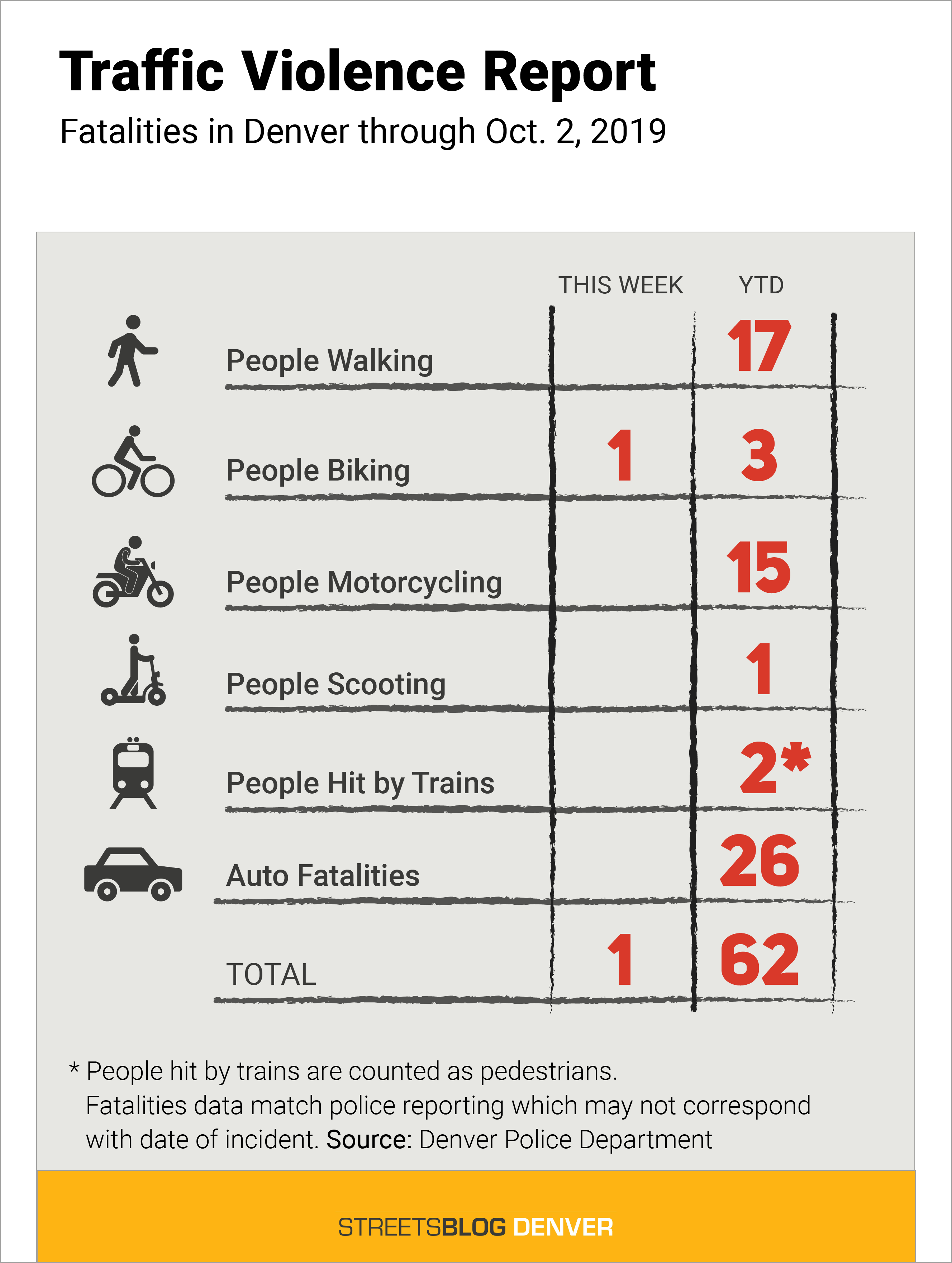 Cameron Holub, a 31-year-old man on a bicycle, was killed in a crash with a sedan, according to Denver police. The road fatality is the 62nd so far this year, which is the same number of people killed on the city’s streets in all of 2018.

The crash happened at 10:22 p.m. at the intersection of 38th Street and N. Brighton Boulevard in RiNO. The victim was taken to the hospital, where he died. The driver, who stayed at the scene, is not facing charges at this time. 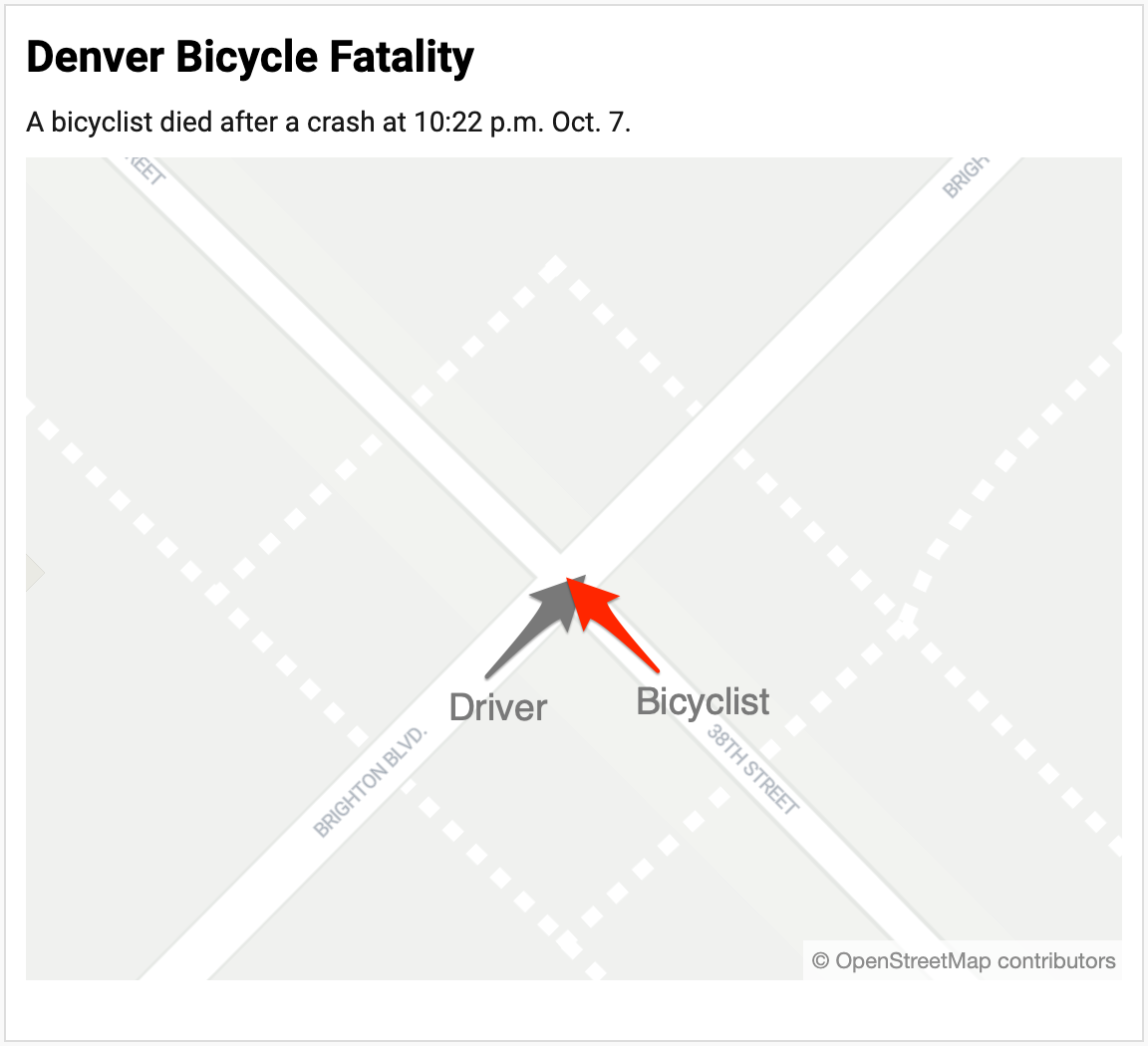 Witnesses other than the driver said the bicyclist ran a red light and crashed into the vehicle, according to Doug Schepman, a spokesperson for the police. “There is no indication at this time that speed was a factor,” he added.

The department is offering few other details. But bike advocates expressed frustration.

“We are deeply saddened that another person biking was killed on a Denver roadway,” said Piep van Heuven of Bicycle Colorado. “Denver needs to do everything it can to improve intersection safety.”

The cyclist was traveling westbound on 38th Street, which has no bike lane. The driver was traveling north on Brighton Boulevard.

Street design changes could help protect cyclists in intersections, according to Jill Locantore of the Denver Streets Partnership. A measure that could help is the corner wedge, which consists of rubber curbs and bollards placed within intersections to slow traffic. The Department of Public works installed its first corner wedges recently on the 15th Street bike lane. But there are no protected bike lanes within the city’s intersections.

“We have yet to see a protected intersection in Denver,” said Locantore. “They’re getting close with the corner wedges that really force drivers to slow down and take a sharp turn.”

Two other people on bikes were killed within two weeks in July. Following the deaths of Scott Hendrickson and Alexis Bounds, Denver’s bicycle community rallied around several events before Mayor Hancock announced a range of street safety enhancements that will be installed this year.

The trend of increasing road deaths continues despite Denver’s Vision Zero Action Plan, which implements goals from the mayor’s 2016 pledge to end all traffic fatalities and serious injuries by 2030.

The plan remains chronically underfunded and Hancock hasn’t allocated enough money in his 2020 budget to address the fast-rising rate of fatalities in the city. Now safety advocates are looking for a leader to find new money for future budgets.

“Everyone agrees there is not enough funding to implement the vision laid out in the plans,” said Locantore. “What we’re looking for now is someone to take the lead on actually doing something, not just agreeing it’s a problem.”