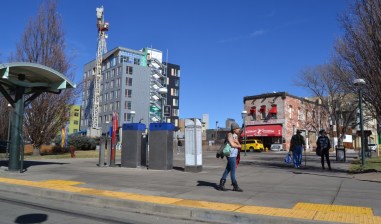 When older people can easily reach important places like the doctor's office or the grocery store without a car, they're more mobile and independent. "Transit oriented development" -- walkable, compact homes and businesses clustered together near high-quality rail and bus service can offer that independence.
Denver neighborhoods are changing for lots of reasons, but one of the starkest is Colorado DOT’s I-70 expansion, which will cut a wide gash across north Denver. CDOT and Governor Hickenlooper point to the shiny park and new side streets attached to the project, even though those changes are table scraps in comparison to the 10-lane highway trench. Hickenlooper even said […]
There are two Denvers, Mile High Connects Executive Director Dace West said Tuesday: The one portrayed in the media as the best place to live, and the one that’s now too expensive for longtime residents to afford. West spoke during the transit advocacy group’s “regional call to action to address our gentrification and displacement crisis.” […]
The vast majority of Denverites would rather not depend on a car, but walking, biking, and transit infrastructure leave them wanting. That’s according to a study [PDF] released Friday by the Urban Land Institute called “Colorado in 2015,” which also found that low-income and Latino Coloradans are the least satisfied with the safety of walking and biking in their […]
More than a dozen people testified at the RTD Board of Directors meeting Tuesday night in support of changes that should expand the reach of a low-cost pass program for low-income transit riders. The changes include measures to streamline a program that allows nonprofit organizations to buy discounted bus and rail tickets in bulk, and distribute them to their clients at […]