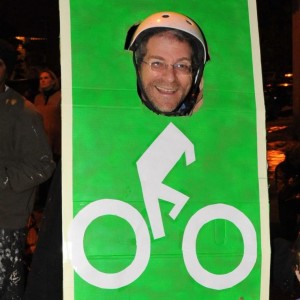 Educated at the Sorbonne and the Yale School of Drama, Gersh Kuntzman is obviously not the person being described here. We're talking about tabloid legend Gersh Kuntzman, who has been with New York newspapers since 1989, including stints at the New York Daily News, the Post, the Brooklyn Paper and even a cup of coffee with the Times. He's also the writer and producer of "Murder at the Food Coop," which was a hit at the NYC Fringe Festival in 2016, and “SUV: The Musical” in 2007.
The nation's battle with COVID-19 had a terrible side-effect for America's pedestrians: more death.
Congress is moving ahead to allocate $30 billion for America's beleaguered transit systems – but it's not enough to keep millions of riders and hundreds of thousands of workers safe from drastic cuts, transit agencies and advocates said.
Oonee – the secure bike parking company – has just built two new compact, ad-free curbside pods that could be a game-changer.
An upstate State Senator has introduced a bill that would allow cyclists to slow-roll through stop signs and go through red lights after a quick full stop.
A top adviser to President-elect Joe Biden gave a tiny glimpse at where transportation policy may start heading after Jan. 20, but he left more question unanswered than answered.
Finishing the stalled 35-mile Baltimore Greenway Trails Network would unleash millions in economic activity, a new report shows.
Gov. Cuomo's 11 p.m.-to-5 a.m. curfew allows essential workers to drive their cars — but it doesn't allow them to rent a Citi Bike or Revel scooter, Streetsblog has learned.
Police are using their squad cars as deadly weapons in their response on Saturday to protesters decrying police violence against people of color, most recently the killing of George Floyd in Minneapolis.
The city's DOT admits its position has "evolved" on the use of a para-military force to make sure people were being socially responsible as they recreated outside their cramped apartments.
Americans are indeed driving less — up to 94 percent less in some places — as the global COVID-19 pandemic keeps people at home, but rural segments of the country are not doing their share to flatten the curve.
The leaders of 10 transit systems — from coast to coast — are begging Washington for "at least" $25 billion in emergency funding as they battle the twin symptoms of the coronavirus: freefalling ridership and additional costs.
President Trump is doing such a poor job of funding infrastructure in urban areas that 10 major cities have banded together to jointly demand immediate action.
Load more stories